In honor of Henri Rousseau’s birthday, we wanted to share how his work influenced the animation of our TED-Ed Lesson on biodiversity. Below are three paintings that inspired us — and why: When designing the rainforest scenes in our lesson on Biodiversity, we couldn’t help but think of Henri Rousseau’s The Dream.

Our color palette was inspired by the richness and depth of greens in his forest scenes. And we love the way the blue & ivory flowers pop out against the many shades of green. Three Apes in The Orange Grove, by Henri Rousseau (1907)

Rousseau’s color choice for the Sun in many of his paintings is fairly difficult to replicate digitally.

It took a lot of layers of brushstrokes and color washes to try to mimic his skies — which offer a perfectly soft contrast to the detailed leaves and fronds in the foreground foliage. 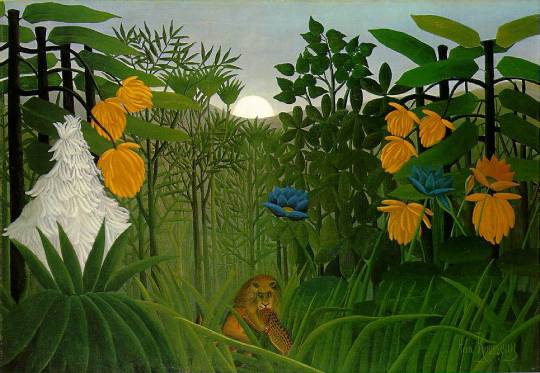 We love the placement of wildlife in Rousseau’s paintings — as if the leaves parted momentarily to allow us to peer in on the secret lives of the lions and monkeys going about their business.

While designing the Biodiversity lesson, we wanted to similarly highlight the variety of species in the rainforest, while also allowing the audience to imagine that much, much more lurks behind the leaves.

Watch the TED-Ed Lesson: Why is biodiversity so important?:

To learn something new every week, sign up here for the TED-Ed Newsletter.